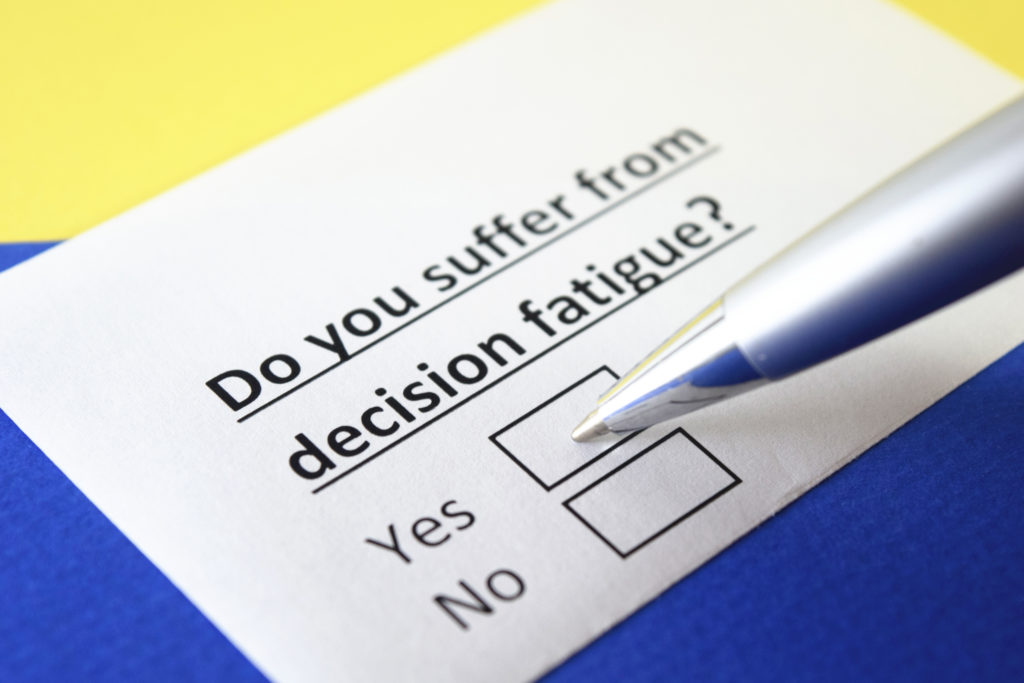 Many of us start out with the best of intentions when it comes to living a healthy lifestyle. Eat clean? No problem! Exercise regularly? Piece of cake! Avoid harmful addictions? Of course! How then do so many of us trip ourselves up along the way with poor decision-making and an unexplainable inability to stay on the right path when we are so determined? The simple answer is a common condition known as Decision Fatigue.

In theory, when it comes to high-performing individuals, the more you accomplish, the better you have performed. However, what if our overambitious agendas are actually sabotaging our long-term goals and limiting chances for even greater success? This is something I encountered on my path to building a multi-million dollar fortune. It’s probably something you have experienced in one form or another as well. That’s why it is important to understand what Decision Fatigue is, so we can overcome it’s crippling effects.

What is Decision Fatigue?

Decision Fatigue is defined as a deterioration of ability to make good decisions as the result of extended sessions of decision making.

Think of your decision-making ability as something akin to a power meter in a video game. With every decision you make through the course of the day, the more your brain energy depletes. The more decisions you make, the faster it drains. Get the picture?

Willpower is something people like to talk about, and despite what we may believe, willpower is limited. The part of your brain that controls willpower, the prefrontal cortex, is the same one that handles a multitude of tasks such as focus and short-term memory. Because this part of the brain stays extremely busy, the more information you overload it with, the worse your decision-making becomes.

A well known study from 1991 demonstrated just how powerful this concept works. Two participant groups were were given a sequence of numbers to remember. The first group was provided a two-digit sequence, while the second was tasked with a seven-digit number. Then, each group was taken into another room with an option to choose between a snack of chocolate cake or fruit salad. The results were quite striking and showed that those that had the seven-digit sequence were more that twice as likely to choose cake as the other group.

This is what is known as “cognitive load” and demonstrates a tangible way to show that when the prefrontal cortex is overloaded, the less likely you are to make good choices. That’s why those who take on a laundry list of resolutions to start a new year invariably fail, because they are not being set up for success.

How to Overcome Decision Fatigue

So if we have good intentions, but are faced with the limitations of biology, how does one with great ambition succeed? Thankfully, there are some powerful and effective ways to promote mental clarity and ultimately better decision-making, which you can easily incorporate into your daily life.

If you start the day with a full tank of decision-making ability it only makes sense to prioritize the key things you need to focus on for early in the day. Not only will you be in peak form to make better decisions, but you can check off the most important tasks from the To Do List while you have more time, not less.

When you hear stories about people like Steve Jobs or Albert Einstein having closets full of the exact same sets of clothes there is a good reason for that. They are keeping things as simple as possible by removing the choice from some decisions. While you don’t have to go far, keeping your choices limited to a few options makes it a simpler task to make quick and less energy-consuming decision. This can apply to more than clothes and include things such as dining options, entertainment choices, social media applications, etc.

During a work week things can get hectic. That’s especially true here in America where we lead busy on-the-go lifestyles. So how about before the week starts, scheduling a set time to plan out a weekly meal calendar, workout routine, or other key decisions that can be decided upon in advance? Once you have it your calendar, consider it set in stone and then you just need follow the roadmap you planned ahead for.

Taking this one step further. one of the best ways to reduce the effects of decision fatigue is to automate as many of the decisions you don’t need to actually make. This could be as simple as setting up autopay functions for monthly bills, or signing up for subscription services that deliver monthly necessities and save you from time-burning shopping runs.

Learn to Say No More Often

Admittedly, this has been a tough one for me. I’m the type that constantly likes to challenge myself by taking on more difficult tasks. There is also the prideful side that likes to be the one who accomplishes things others cannot. The result is I often overload myself by taking on too much responsibility which leads to unnecessary stress. They key here is to just get more comfortable saying “No”. The more you do it, the easier it becomes and then you can dedicate more time to the truly important goals and responsibilities on your list.

Make Sure you Get Enough Sleep

We all know the importance of a good night’s sleep and how we start the day with depleted mental faculties when we do not get enough quality sack time. Therefore, as often as possible make it a routine to ensure you get the proper of amount of rest to perform at your peak. Sleep requirements vary for each individual, but most experts recommend somewhere from 7-9 hours per night. Few things are as important for your brain as a consistent sleep schedule.

Schedule Time For Breaks Throughout The Day

Similarly, it’s also important to get some mental rest during the day, as well. One of the best features of my FitbIt Ionic is that it can be set to ping me every hour if I don’t take the prescribed amount of steps. In effect, it signals inactivity which is a great benefit for people who engross themself deeply in work or projects. The secondary benefit of this for me though is a reminder to get up away from the screen and recharge my mental battery. This is a great chance to take a short walk, get some fresh air, and quite simply re-set my focus. For those who struggle to get a quality sleep on a consistent basis, a midday power nap can also do wonders.

It goes without saying that eating well is not only good for your physical being, but your mental health as well. To take this a step further, I employ some go-to supplements for even better mental faculties. One, I use every day is Brain Octane Oil from Bulletproof. This powerful supplement is an MCT Oil which delivers a concentrated form of fatty acids that are quickly converted in ketones and can be used to boost cognitive function. If we go back to the early visual of your decision-making ability as a power meter, think of an MCT Oil as a power-up than can help replenish a depleted bar. Score!

These are just a few of the tools at your disposal, but if employed correctly they can provide powerful benefits in mental clarity and advanced performance and help you overcome Decision Fatigue.  Try to incorporate these 7 tactics into your routine and see how much more you accomplish, while at the same time reducing your stress levels. I strongly believe the result will be new levels of personal excellence for you.